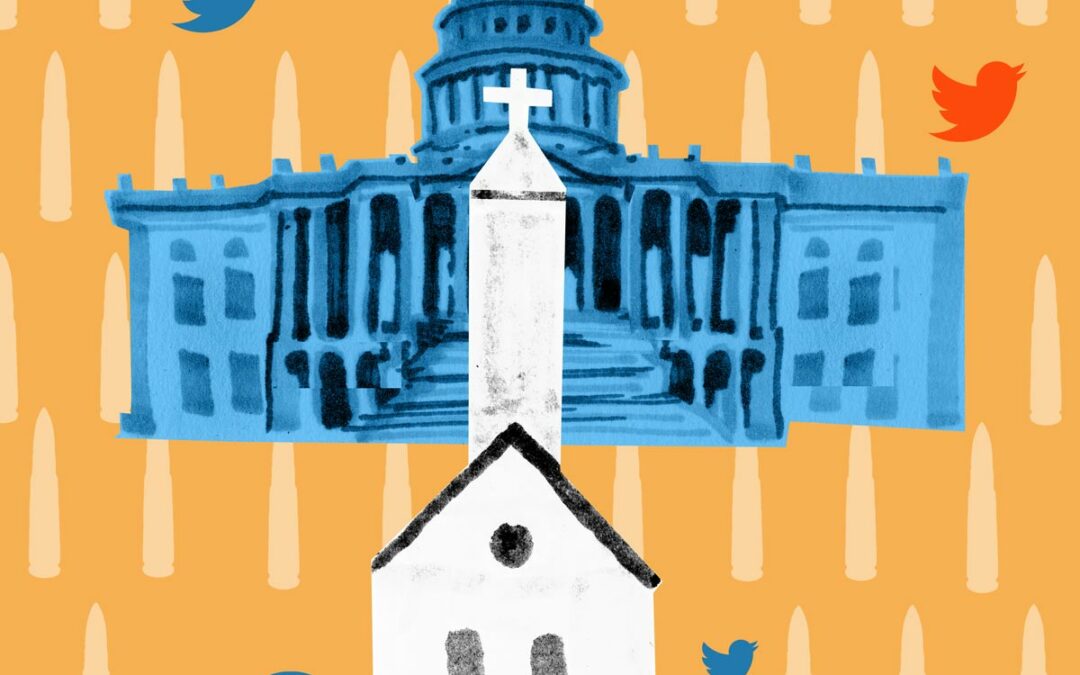 A political candidate sharing his raw feelings about a hot button issue with the voting public during a campaign rally: what could possibly go wrong? It’s risky business, in Jason Odell Willliams’ timely political comedy-with-a-twist Church & State, which begins a 4-week regional premiere run on Thursday, January 27 in the Jerry Russell Theatre at Stage West.

North Carolina Senator Charles Whitmore has a problem. Even though he’s a well-liked guy with solid bipartisan appeal, his re-election is not looking like a slam-dunk.  And then, his off-the-cuff remark after a funeral for two school shooting victims goes viral. Now it’s damage control time.  Both his New York liberal campaign manager and his charming conservative wife are in agreement—he should walk back his remark.  But Whitmore wants to be true to himself, come what may.  What to do?

Whitmore’s decision leads to a surprising result, and there’s more than one twist to come.  Jason Odell Williams has crafted a deft mixture of comedy and drama, with characters who are both comic and utterly human.  This play is sure to make audiences laugh…and think.

Jason Odell Williams is an Emmy-nominated writer and producer as well as an award-winning playwright and novelist. Hailed as a “postmodern Clifford Odets” by the L.A. Times and “this country’s newest Eugene O’Neill” by the Santa Monica Daily Press, his play Church & State was nominated for Best New Play by the Off-Broadway Alliance and L.A. Ovation Awards. Church & State was selected to be an NNPN Rolling World Premiere with productions in Los Angeles and Rochester before running for over 100 performances Off-Broadway at New World Stages. Jason’s first play Handle With Care was a New York Times Critics’ Pick, ran for over 100 performances Off-Broadway starring Carol Lawrence, has been produced over twenty times since 2011 in the U.S. and Canada, and won three Theatre Bay Area Awards including Outstanding Production. Other plays include Baltimore in Black & White (the cell theatre), Someone Else (NC Stage), The Science of Guilt (DR2), Going Offline (Fells Point Corner Theatre), The Jungle Gym (American Globe Theatre). Jason was a winner of the 2012 Hudson Valley Writers’ Center contest and the winner of the 2011 Fixitsolife Theatre playwriting contest. He lives in New York City with wife and daughter. More at http://jasonodellwilliams.com/

Church & State will be directed by Jenna Burnett.  The cast features Ashley Wood, last at Stage West as Dr. Evans in Holmes and Watson, as Charlie, with Shannon J. McGrann, who appeared as Nora in Stage West’s A Doll’s House Part 2, as wife Sara. Ryan Michael Friedman, last at Stage West as Love in Everybody, will appear as Tom, Marshall, Reporter, and Security Guy.  And making her Stage West debut is Madeline Dockery-Furhmann, seen as Emilia in Winter’s Tale at Shakespeare in the Bar, as Alex.

Church & State will preview Thursday, January 27 at 7:30 and Friday, January 28 at 8:00, and will run through Sunday, February 20.  All Sunday matinees will be Safe Sundays, with proof of vaccination required. Masks are required for all performances. Performance times will be Thursday evenings at 7:30, Friday and Saturday evenings at 8:00, with Sunday matinees at 3:00.  Ticket prices for the season are $40 on Thursdays and Fridays, and $45 on Saturdays and Sundays, with $20 tickets for the two preview performances.  Food service is available 90 minutes prior to performances (reservations are advised).  Reservations and information are available through the Box Office (817-784-9378), or on the website, www.stagewest.org.

Members of the media may attend Saturday, January 29, or any performance thereafter.

Walk or bike to dine June 3-5 and get FREE STUFF to help you make the most of your summer days outside. Ride a Bike Sharing bike for FREE all weekend long.  Get free stuff just for walking or biking to your favorite local restaurant or coffee shop. Blue Zones Project...
Read More

Concerts in the Garden is Back!

Don't Miss Music Under the Stars! Concerts in the Garden is back this summer at the Fort Worth Botanic Garden from June 16 through July 4. The lineup this summer brings local favorites like Asleep at the Wheel and Jackopierce, along with Windborne's The Music of...
Read More

Whiskey Myers Headlines Dickies Arena on October 15, 2022 with Read Southall Band Tickets On Sale Friday, May 6 at 10:00AM With anticipation growing around their sixth studio album Tornillo, set for release July 29 via the band’s own Wiggy Thump Records with...
Read More

Chef Tim Love and Live Nation revealed the opening series of live performances featuring renowned touring acts and local artists across a wide variety of genres, as well as the official opening date for the music hall inside of Tannahill’s. A full list of shows that...
Read More