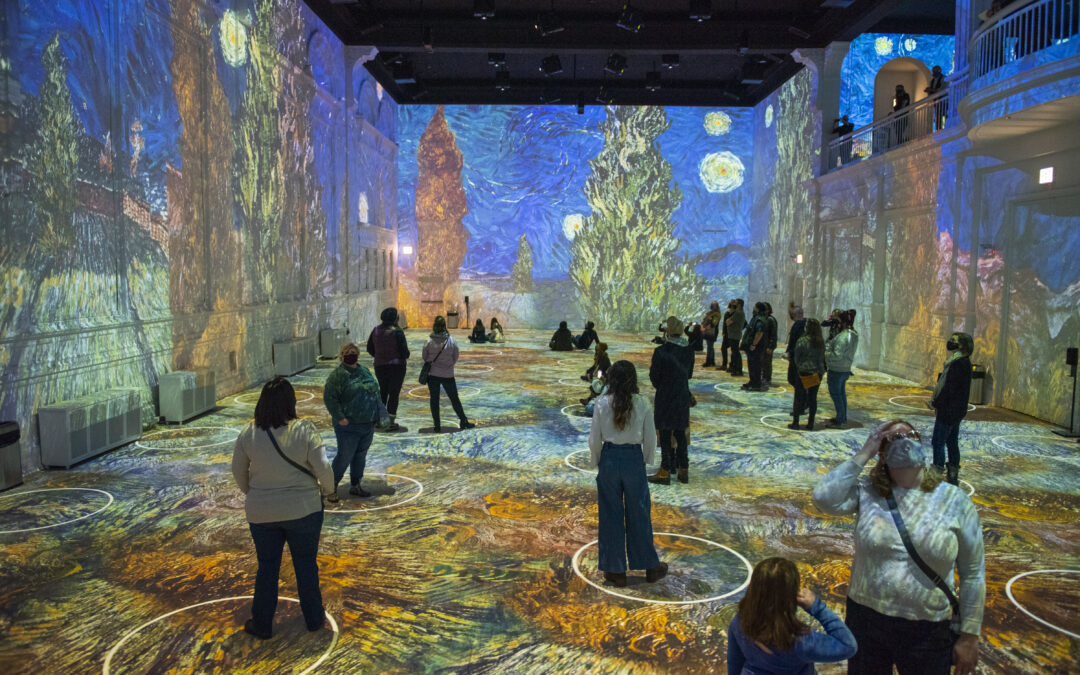 Lighthouse Immersive and Impact Museums announce that the restored historic Masonic Temple in East Quarter is now Lighthouse Dallas, a new art and culture venue for the city of Dallas and the official location for the highly anticipated Immersive Van Gogh Exhibit. The venue is located at 507 South Harwood Street in downtown Dallas’s East Quarter, and the exhibit will span nearly 30,000 square feet. Since its premiere in July 2020, more than two million tickets have been sold to Immersive Van Gogh, making it the most popular attraction currently in North America.

Guests of Lighthouse Dallas and the premiere of its Immersive Van Gogh Exhibit will be transported by the works and life of post-impressionist painter Vincent Van Gogh through the use of state-of-the-art technology, theatrical storytelling, and world-class animation. Created by Italian film producer Massimiliano Siccardi, whose work was recently highlighted in the Netflix series Emily in Paris, and featuring music by Italian multimedia composer Luca Longobardi, the production harnesses 60,600 frames of captivating video totaling 90,000,000 pixels and 500,000+ cubic feet of projections, bringing the painter’s masterpieces to life.

Immersive Van Gogh Exhibit will be the first exhibition for Lighthouse Dallas. As the newest art and culture venue for the city, Lighthouse Dallas will focus on next-generation socially and culturally conscious programming. The 46,000 square foot art venue will host a variety of impactful cultural exhibitions and installations aimed at encouraging discussion and inspiring visitors. “Dallas is a progressive city, and we can’t wait to be a part of the arts and entertainment community here,” says Diana Rayzman, Co-Producer and President of Impact Museums. “We look forward to bringing the city a roster of groundbreaking exhibitions in the years to come .”

The original Immersive Van Gogh is a spectacular, vivid, and breathtaking digital art experience that invites audiences to enter the legendary works of post-Impressionist artist Vincent van Gogh—evoking his highly emotional and chaotic inner consciousness through art, light, music, movement, and imagination. Featuring stunning towering projections that illuminate the artistic genius’s mind, the exhibition will feature a curated selection of images from Van Gogh’s 2,000+ lifetime catalog of masterpieces. Famed pieces include Mangeurs de Pommes de Terre (The Potato Eaters, 1885), Nuit étoilée (Starry Night, 1889), Les Tournesols (Sunflowers, 1888), and La Chambre à coucher (The Bedroom, 1889). Paintings will be presented how the artist first saw the scenes—based on an active life and moving landscapes turned into sharp yet sweeping brush strokes. The hour-long experience is designed with the highest safety standards and protocols in mind. Capacity will be limited in accordance with local restrictions.

Massimiliano Siccardi studied at the London School of Contemporary Dance. In 1990, he left the world of dance to begin a new journey in video art. Siccardi quickly became the artistic force behind several visual mises-en-scène for choreographers worldwide, creating video scenographies for numerous prestigious festivals and galas. He reconstructed footage mapping the Basilica di Giotto and the Teatro Petruzzelli of Bari, where one of his permanent installations virtually rebuilt Cupola’s frescoes. Siccardi is also a celebrated photographer and has had photo exhibitions in Spoleto and Rome, to name a couple. He is a professor of digital image elaboration at the Accademia di Comunicazione e Immagine in Rome. In 2012, Siccardi received the prestigious International Award “Romaindanza” for his talent in dance theatre’s visual work. Since 2012, he has been an artist in residence at the Carrières de Lumières – Atelier des Lumières where he authored the mises-en-scène of numerous immersive shows. He is currently creating projects in Italy, New York, Berlin, Leipzig, and Rome.

Italian composer and pianist Luca Longobardi is a classically trained musician who incorporates contemporary electronic music into his pieces. Born in 1976, Longobardi studied classical music in Italy and New York and went on to earn his doctorate in digital audio restoration in Rome in 2011. The experience he has gained as a theatre musician has increased his interest in the relationship between sounds and spectacle. He has composed music for ballets, films, accompanied installations, and experimental art productions (Atelier des Lumières in Paris, Carrière des Lumières in Baux-de-Provence, Kunstkraftwerk in Leipzig). His recordings and multimedia performances evoke an intense experimental electronic music that meets pure, ethereal, and simple-seeming piano playing that relays deep emotions.

Founded in Toronto in 2003 by Corey Ross, Starvox Entertainment has ranked in Profit Magazine’s fastest-growing Canadian companies for five years in a row. Starvox produces, manages, represents, and promotes cross-over performing arts shows and exhibitions that tour Canada, the United States, and internationally. Ross has produced multiple theatrical shows in Chicago, including the Harry Potter parody Potted Potter, Evil Dead: The Musical, Champions of Magic, and Sherlock Holmes. In Las Vegas, Ross produces three shows for Caesars Entertainment—Wow, Extravaganza, and Potted Potter. In the art exhibitions, Ross has produced the Art of Banksy in London, Canada, the USA, Taiwan, and Japan and Immersive Van Gogh and Illusionarium in Toronto.

Founded in 2004 by the enterprising Russian-born impresario Svetlana Dvoretsky, Toronto’s Show One Productions initially focused on classical music. Since then, the company has expanded dramatically and is now a leading presenter of high-profile international artists, symphony orchestras, theatre and dance companies, and special projects. Past and present clients include Mikhail Baryshnikov, John Malkovich, Michel Legrand, Slava Snow Show, Valery Gergiev, Mariinsky Orchestra, Vladimir Spivakov, and the Moscow Virtuosi, Eifman Ballet, Vakhtangov Theatre, opera stars sopranos Sondra Radvanovsky and Hibla Gerzmava, and the late baritone Dmitri Hvorostovsky. Trio Magnifico Opera Gala – the historical union and once-in-a-lifetime event at The Four Seasons Opera House of soprano Anna Netrebko and tenor Yusif Eyvazov in their Toronto debuts, with Hvorostovsky in his last Toronto appearance – remains an exceptional musical memory in the history of the performing arts in Canada. Dvoretsky is a proud recipient of the Order of York by the Government of Canada for “an outstanding contribution in art and culture.”

Impact Museums operates a series of next-generation museum experiences focused on important social and cultural causes. Our immersive and Instagram-friendly experiences amaze and inspire audiences around the world. Leveraging the latest technologies, in partnership with the world’s top artists, activists, and creative thinkers, we invite participants to experience our world in groundbreaking, new ways. Our mission is to inform and inspire everyone to take action and to help solve our most pressing global issues. Whether experienced in person or via shared content on social media, we turn inspiration to action and make it easy for everyone to have an impact, creating a larger movement that will drive meaningful change. Impact Museums is founded by a passionate team of creative entrepreneurs building the next generation of museums and experiences. Collectively, we’ve built 15 companies, produced over 250 events, managed P&Ls of $500M, scaled global teams in 65 offices, collaborated with the world’s top artists, and built lasting social impact programs.

Todd Interests in an award-winning real estate firm based in Dallas, Texas. With a focus on adaptive reuse and historic preservation, Dallas projects include The National, East Quarter, One Dallas Center, and 400 N. Ervay. Founded in 1990 by Shawn Todd and led by his sons and partners, Patrick Todd and Philip Todd, family-owned Todd Interests and its related entities have been involved in the acquisition, development, redevelopment, and disposition of more than $2.5 billion of real estate property across the country. For more information, please visit ToddInterests.com.

East Quarter is a neighborhood filled with turn-of-the-century brick, stone, and timber jewel boxes. Once home to automobile showrooms, Todd Interests restored 18 existing historic buildings and developed a new 20-story mixed-use development with retail, office, and residential space. Though an expansive building, the new development has been carefully designed to respect the already existing historic structures. At its core is the nearly 100-year-old Meletio building, which will serve as the centerpiece of the new development. The project features 200,000 square feet of offices, 25,000 square feet of retail space, and 335 class A residential apartments, complete with an eighth-floor amenity deck with a swimming pool and outdoor areas. For more information, please visit EastQuarterDallas.com or @eastquarter on Instagram
Media contact: Kristie Ramirez, kristie.ramirez@giantnoise.com, 214.693.4522

Outdoor Sculptures from The Modern Now in Downtown Fort Worth

TICKETS ON SALE FRIDAY, AUGUST 5! Performing Arts Fort Worth, the non-profit owner and operator of Bass Performance Hall, announced today the 2022-2023 lineup for the BNSF Popular Entertainment Series. The lineup features a return of audience favorites, a celebration...
Read More

Fred’s Texas Café CEO: From Dishrags to Carrying the Moneybags

Article written by John Henry and originally published here by Fort Worth, Inc.As it concerns life-changing events, taking over Fred’s Texas Café as CEO or even moving from the sacred ground of the original location are down Quincy Wallace’s list of those kinds of big...
Read More

Internationally Acclaimed ‘LIGHTSCAPE’ Coming to Fort Worth Botanic Garden for 2022 Holiday Season From November 18 through January 8, Lightscape will illuminate evenings at the Garden with more than one million holiday lights, tunnels, fire, sculptures, bluebonnets,...
Read More

by Whats Up Fort Worth | July 9, 2022 | Best in Fort Worth, Family Fun, Festivals, Food and Restaurants, Fort Worth News & Events, Live Music | 0 Comments

Tubing is back at Panther Island Pavilion Rockin’ the River returns to Thursday nights! Rockin’ the River kicks off next Thursday, July 14, and we have a great season lined up; we’re bringing in some fresh acts as well as favorites from previous years. The event has...
Read More