FOCUS: Frances Stark
at The Modern 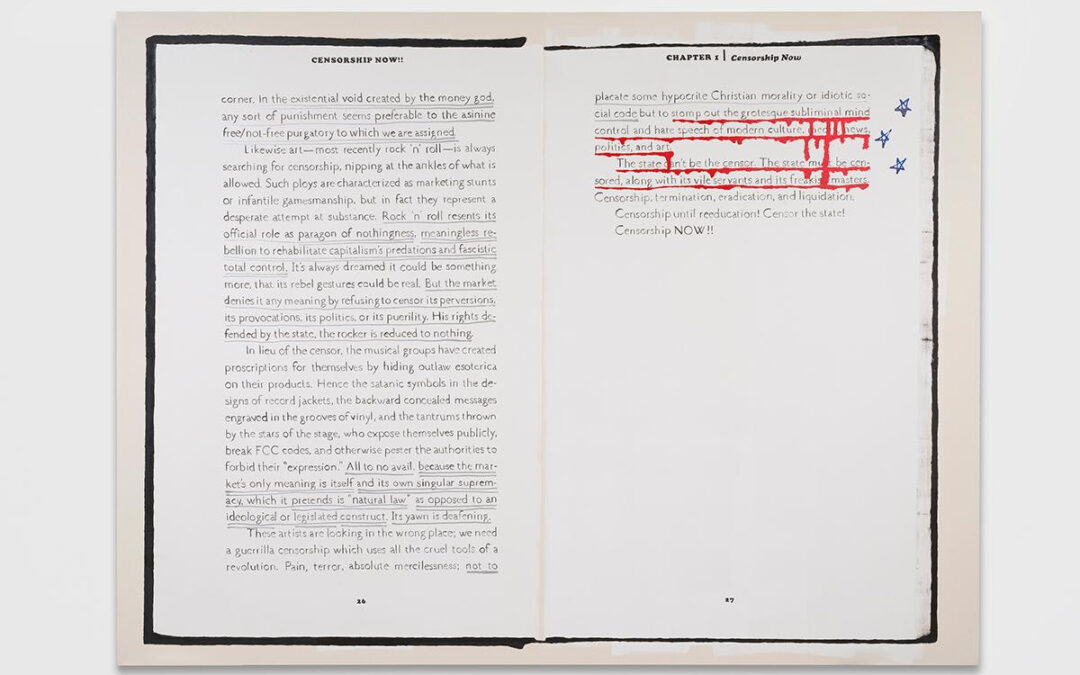 The FOCUS series is presented by the Modern Art Museum of Fort Worth and features three solo exhibitions each year. Started in 2005, this series is committed to introducing visitors to emerging artists gaining worldwide acclaim and showing the work of esteemed mid-career artists previously under-recognized in the region. The FOCUS series is organized by Associate Curator Alison Hearst. FOCUS exhibitions are open to the public and are included in general Museum admission.

The Modern Art Museum of Fort Worth is pleased to present the exhibition FOCUS: Frances Stark, on view November 19, 2021–January 9, 2022. Stark is an interdisciplinary artist and writer whose work comes in many forms, including painting, video, collage, performance, and drawing. Works often reflect a particular subject she is engaged with, such as pedagogy, literature, relationships, art, music, sex, procrastination, and motherhood. While these themes are of personal interest to her, the subjects are relatable and rendered accessible through Stark’s sincere and witty combinations of image and language. Her ability to find humor and poetry in even the most mundane aspects of daily life and society led the Los Angeles Times to declare her “the visual poet laureate of the internet age.”

Reading and book pages have had an evolving role in Stark’s approach to artmaking for some time. In recent paintings, such as Reading Henry Miller’s Air-Conditioned Nightmare from the mid-1940’s, 2019, and Ian F. Svenonius’s “Censorship Now” for the 2017 Whitney Biennial, 2017, the artist captures different books she is reading. As she has stated, “I’m not making a syllabus but rather capturing these haptic engagements with (mostly) American voices critical of empire.” For the Censorship Now series, Stark made enlarged double-page spreads from the iconic punk musician Ian Svenonius’s 2015 manifesto—a book containing serious reflections on and critiques of American culture, particularly pop culture and mass media. Veiled in playful satire, ultimately it calls for the censorship of the state in order to free humankind. Though tongue-in-cheek, Svenonius’s text aims to dislodge our prescribed ways of thinking. For the paintings, Stark painstakingly reproduced her copy of Censorship Now!!, with her handwritten annotations, adding the layer of her as a reader and editor into the work, while also sharing her platform—the Whitney Biennial—amplifying Svenonius’s underground voice. The artist has said this series is “clearly a provocation painted in exaggeratedly broad strokes—an angry, exasperated, and only half tongue-in-cheek amplification of the anger and frustration of the culturally disenfranchised.” Both the text and the paintings are provocative and show Stark’s continued interest in language and the potential for art to catalyze.

FOCUS: Frances Stark will be the artist’s first museum solo exhibition in Texas and features new and recent work from the past five years. Stark recently stated, “The overall work of the last five years addresses not only just the marking of books as a haptic experience and something that depicts the encountering of minds (reader and writer, artist and viewer), but also the culture of voyeurism that we have grown accustomed to as the media world has usurped so much of our cultural landscape.”

Tuesday Evenings at the Modern Lecture

At the conclusion of the FOCUS season in the spring, one work or group of works from each exhibition is held for the annual Purchase Meeting. During this event, members of the Director’s Council vote to determine which work will be recommended for acquisition by the Modern, thus contributing to the Museum’s permanent collection and shaping its cultural footprint. To learn more about how to deepen your relationship with the Modern and the FOCUS program through membership and to be a part of the acquisition process, please contact the development department at development@themodern.org.

Modern Art Museum of Fort Worth

The Museum offers half-price tickets on Sundays and free admission on Fridays.