Outdoor Sculptures from The Modern Now in Downtown Fort Worth 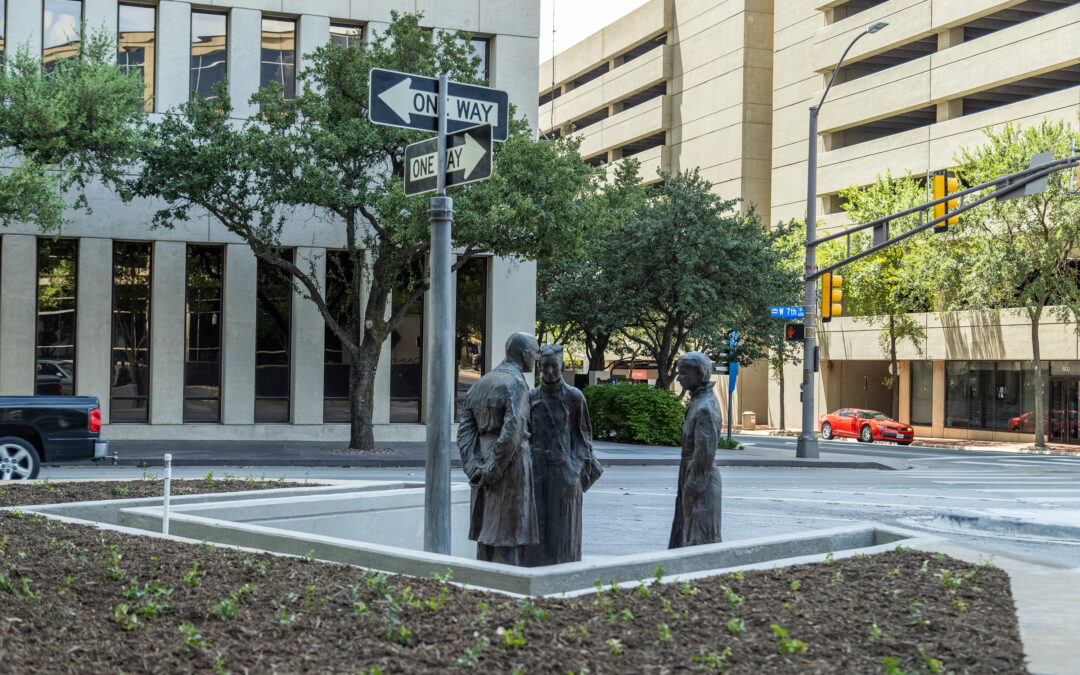 The Modern Art Museum of Fort Worth and First on 7th LP are partnering to present three outdoor sculptures from the Modern’s permanent collection for public viewing downtown beginning the week of August 8 and remaining indefinitely. These works were chosen for their unique fit in the walkable, park-like setting situated at a crossroads in urban downtown.

The Modern’s Director Marla Price comments, “We were delighted when the First on 7th team suggested installing sculpture from our collection on this site. Our sculptures joining the artwork currently on view create a wonderful entrance to Fort Worth’s downtown area.”

First on 7th Plaza, 500 West 7th Street, Fort Worth at the entrance to downtown. The sculptures are sited on the tree-lined triangle adjacent to the 20-story First on 7th building and the Cantey Hanger Plaza.

Designed by world-renowned architects Skidmore, Owings and Merrill in 1961, the building was originally the headquarters of the First National Bank of Fort Worth. The architecture exemplifies mid-century office design and modernist style. The Isamu Noguchi sculpture on the plaza was commissioned in 1960 to help shape an environment that connected the art to the architecture.

The addition of the Modern Art Museum of Fort Worth outdoor sculptures helps form an art corridor into downtown, joining the Noguchi work and Jonathan Borofsky’s iconic Man with Briefcase, 2002, across 7th Street in Burnett Park.

Parking is available on adjacent streets and in the building’s parking garage with entrance on 6th Street. The plaza is convenient to Trinity Metro’s Route 2 and The DASH Route. A Fort Worth Bike Share station is located just across Burnett Street to the west.

• Collection of the Modern Art Museum of Fort Worth, Gift of the Artist

The work of Alex Katz (American, born 1927) is known for simplified line, shape, and color, with recognizable and personally meaningful content. Park Avenue Departure, 2019, was first exhibited in Midtown Manhattan along the median strip of Park Avenue. The eight-foot cutout depicts the artist’s wife Ada – whose image has regularly appeared in his work throughout his career – from behind as she is walking. While distinctly flat, smooth, and reminiscent of an advertisement, the sculpture evokes the tenderness and intimacy between the artist and his muse.

• Collection of the Modern Art Museum of Fort Worth, Gift of Dr. and Mrs. Marvin C. Overton III

Jesús Bautista Moroles (American, 1950-2015), a native Texan, harnessed the power of granite in sculptures such as Texas Shield, 1986. The work’s two vertical slabs are woven together at a 90-degree angle down a central spine, part of the artist’s “granite weaving” series. Interested in the variety of texture, color, and forms within Texas pink granite, Moroles juxtaposed alternating smooth, polished stripes against raw-edged, undulating ones to reveal the beauty of the material in both its manipulated and natural states.

George Segal (American, 1924-2000) created works that focus on contemporary daily life. Chance Meeting, 1989, depicts a street corner with three life-size figures with a dark green patina, each dressed in modern clothes. Apparently having unexpectedly run into each other at the intersection of two city streets, the figures’ postures and attentive expressions indicate that they are engaged in a serious conversation.

The sculptures, installed the week of August 8, are on view for an indefinite period.

2022 EDITION OF THE WTA FINALS TO BE HELD AT DICKIES ARENA IN FORT WORTH Fort Worth will host the 2022 event under a one-year agreement The WTA announced today Fort Worth, Texas will host the 2022 season-ending WTA Finals from October 31 – November 7. The prestigious...
Read More

A Tribute to Anne Windfohr Marion at The Modern

Fort Worth Oktoberfest at Trinity Park!

Texas Ballet Theater (TBT) will begin its 2022-2023 season with Cirque du Ballet, a brand-new production from Ben Stevenson, O.B.E., September 16-18 at Winspear Opera House in Dallas and September 30 – October 2 at Bass Performance Hall in Fort Worth. Choreographed by...
Read More

TICKETS ON SALE FRIDAY, AUGUST 5! Performing Arts Fort Worth, the non-profit owner and operator of Bass Performance Hall, announced today the 2022-2023 lineup for the BNSF Popular Entertainment Series. The lineup features a return of audience favorites, a celebration...
Read More