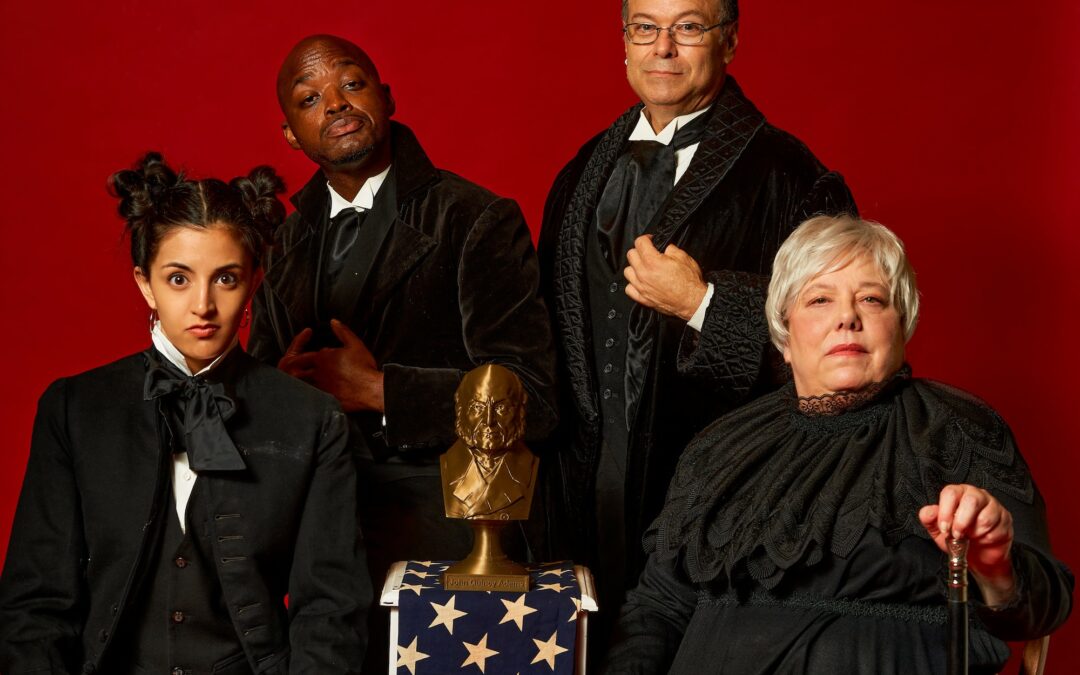 (Fort Worth, Texas)  What could it have been like to be the son of a Founding Father, later to become President himself, who interacted with so many of this country’s movers and shakers?  Aaron Posner tackles this question with wit and intelligence in his play JQA, which he subtitles “A Series of Fictitious Encounters Between John Quincy Adams & Sundry Family Members & Political Associates on the Subjects of Life, Liberty & The Pursuit of a More Rational Relationship with Government.” Stage West will present this timely, entertaining and highly theatrical piece in a regional premiere, from October 7 through 31 in its new Evelyn Wheeler Swenson Theatre.

John Quincy Adams: son of the second President, promising diplomat, one-term senator, Secretary of State, 6th President, member of the House of Representatives. We meet him first in 1776 as a child, having a conversation with his father which is both intimidating and enlightening. The play then moves through a kaleidoscope of conversations with various historical figures at critical points during JQA’s life. Did they happen? Maybe…maybe not.  Posner points out that “the play is not historically accurate, but it is largely historically feasible… The goal has never been historical accuracy, but rather evocation, provocation, and prompting discussion about where we are now and maybe a bit about how we got here.”  Provocative and patriotic, this play will make audiences laugh and think, as it shines a very modern spotlight on the early days of the evolving American experiment.

Due to the rise of the Covid Delta variant, Stage West is requiring that all audience members wear masks other than while eating or drinking. Two sections of the theatre have been set up to allow for distanced seating, should patrons prefer. Additional information about Stage West’s Covid protocols can be found on the website.  Patrons not yet feeling safe about returning to live theatre will be able to stream the production beginning Thursday, October 14.

Aaron Posner is a Helen Hayes and Barrymore Award-winning director and playwright. He is a founder and former Artistic Director of Philadelphia’s Arden Theatre, is an Associate Artist at both the Folger Theatre and Milwaukee Repertory Theatre, and has directed at major regional theatres from coast to coast. His adaptations include Chaim Potok’s The Chosen and My Name Is Asher Lev (both of which have enjoyed successful runs at more than 50 other theatres across the country), as well as his Chekov adaptations Life Sucks and Stupid Fucking Bird (both produced in recent seasons at Stage West). Posner was raised in Eugene, Oregon, graduated from Northwestern University, is an Eisenhower Fellow, and lives near Washington, DC.

JQA will be directed by Emily Scott Banks, who last directed Stage West’s Ada and the Engine, as well as its two previous Posner productions.  The cast features Shyama Nithiananda, seen in Stage West’s presentation of Moonrise Initiative’s In Search of the Sublime, Randy Pearlman, recently seen in the Theatre Three production of The Music Man, Nancy Sherrard, previously at Stage West in Major Barbara and The Code of the Woosters, and J. R. Bradford, most recently seen in the Jubilee Theatre production of To Be Young, Gifted and Black, making his Stage West debut. Cast members will play multiple roles, with all four playing Adams at different points. Tiffany Cromwell will serve as Production Stage Manager, with set design by Ian Loveall, costume design by Aaron Patrick DeClerk, lighting design by JoJo Percy, sound design by Ryan Joyner, and props by Lynn Lovett.

JQA will preview Thursday, October 7 at 7:30 and Friday, October 8 at 8:00, and will run through Sunday, October 31.  There will be no opening night reception for this show due to Covid; we hope to resume those on the next show. Performance times will be Thursday evenings at 7:30, Friday and Saturday evenings at 8:00, with Sunday matinees at 3:00.  The show will be interpreted for the hearing-impaired on Sunday, October 24.

Ticket prices for the new season are $40 on Thursdays and Fridays, and $45 on Saturdays and Sundays, with $20 tickets for the two preview performances.  Food service is available 90 minutes prior to performances (reservations are advised).  Reservations and information are available through the Box Office (817-784-9378), or on the website, www.stagewest.org.

The play runs about 90 minutes without intermission, and is rated PG-13 for language.

Treat Street at the Historic Fort Worth Stockyards

The 2022 Women’s Rodeo World Championship Moves to Fort Worth in May with New Competition Format Updates Richest Women’s Rodeo Event in History moves to Texas with PBR World Finals in 2022   FORT WORTH, Tex. – The WCRA (World Champions Rodeo Alliance) and PBR...
Read More

FOCUS: Frances Stark
at The Modern

November 19, 2021 - January 9, 2022 The FOCUS series is presented by the Modern Art Museum of Fort Worth and features three solo exhibitions each year. Started in 2005, this series is committed to introducing visitors to emerging artists gaining worldwide acclaim and...
Read More