The Texas A&M University Aggies and the Texas Christian University Horned Frogs men’s basketball programs are set to face off at Dickies Arena on Saturday, December 12 during the annual Lone Star Showdown presented by Simmons Bank.

This matchup will mark the first contest between TCU and Texas A&M in men’s basketball since the Horned Frogs claimed a 91-89 win against the Aggies in 1996.

Texas Tech and Houston rivaled each other for many years beginning in 1972 when Houston joined Texas Tech in The Southwest Conference. The teams most recent match up in 2014, resulted in an 82-69 victory for the Houston Cougars, breaking a nine-game matchup win streak for the Texas Tech Red Raiders.

Sam Houston State and Boise State will take to the court for the second time in program history. The first match up took place in 1987 with a 73-66 victory for Boise State.

“We are excited to revive some historic basketball matchups at Dickies Arena,” said Trail Drive Management Corp.’s Matt Homan, president and general manager of Dickies Arena. “In collaboration with the NCAA, health professionals and government leaders we have implemented extensive procedures and protocols to protect the health and safety of the student athletes, coaches and fans. We look forward to providing a safe and enjoyable experience for our guests and bringing great games to Fort Worth.”

Tipoff, on sale dates and television broadcast information for all three games will be announced at a later date.

About Dickies Arena:
Dickies Arena is a 14,000 seat, spectacular multipurpose venue located adjacent to the Will Rogers Memorial Center campus in Fort Worth, Texas. The facility is the result of a pioneering public-private partnership between the City of Fort Worth, Tarrant County, the State of Texas and a group of private-sector participants, including foundations, individuals and organizations. The arena is owned by the City of Fort Worth and managed by the not-for-profit operating entity, Trail Drive Management Corp. (TDMC). The state-of-the-art arena hosts concerts, sporting events and family entertainment, and is home to Fort Worth Stock Show Rodeo performances. For more information, visit www.DickiesArena.com. Wolfgang Puck Catering at The Modern

Wolfgang Puck Catering and the Modern Art Museum of Fort Worth announce their partnership, with the former now joining as operator of all the Museum’s catering and events, as well as Café Modern, beginning this spring. With its unique restaurant-style approach to...
Read More

Music, Memory and More with the Fort Worth Opera

This innovative new program is funded in part by a generous grant from the Texas Commission on the Arts, in partnership with Dementia Friendly Fort Worth and the United Way Area Agency on Aging in Texas. Fort Worth Opera (FWO) announced today the launch of Music,...
Read More

Multi-session ticket packages are now on sale for the 2021 U.S. Gymnastics Championships, which will be held June 3-6 at Dickies Arena in Fort Worth, Texas. The four-day championships will decide the 2021 men’s and women’s national all-around and individual event...
Read More

Join the Kimbell Art Museum for a bilingual story time that introduces young minds to the magic of storytelling and the different ways that art inspires us! Virtual Pictures and Pages/Fotos y Libros explores connections with featured children’s books and artworks from...
Read More

Easter Brunch & Dining in the Fort

Easter is a time for new beginnings. Not only does Easter feel like the real beginning of new life in the world, spring flowers, pastel colors, happy faces and families gathering together to celebrate the Resurrection, but it also symbolizes new beginnings in our...
Read More

The Stockyards Just Got a Little Bit Tastier

Road to the Horse 2021 is Coming to Cowtown Coliseum!

Stockyards Heritage Development Co. is pleased to announce Road to the Horse 2021 will take place inside the Cowtown Coliseum, located at the Historic Fort Worth Stockyards from March 25 - March 28, 2021. Road to the Horse strives to entertain and educate fans about...
Read More

Broadway at the Bass Cancellations

Performing Arts Fort Worth, the non-profit owner and operator of Bass Performance Hall, announced today that the two remaining shows on the current Broadway at the Bass season have been cancelled due to the ongoing impact of COVID-19 on the Touring Broadway...
Read More

The 40th Season of the Scarborough Renaissance Festival

THE 40TH SEASON OF SCARBOROUGH RENAISSANCE FESTIVAL® BEGINS APRIL 10TH! Scarborough Renaissance Festival® presented by T-MobileTM is coming back better than ever and ready to celebrate its 40th season starting April 10, 2021! The season will run eight consecutive...
Read More 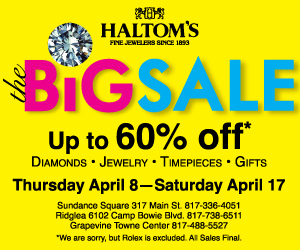